题目：Interfacing Nanomaterials with Biology: From CRISPR to Antimicrobials

A key issue in the use of nanomaterials is controlling how they interact with themselves and with the outer world. Our research program focuses on the tailoring of nanoparticles of surfaces for a variety of applications, coupling the atomic-level control provided by organic synthesis with the fundamental principles of supramolecular chemistry. Using these nanoparticles, we are developing new strategies for biological applications This talk will focus on the interfacing of nanoparticles with biosystems, and will discuss the application of self-asssembled nanoparticles as delivery vehicles. We will demonstrate the delivery of proteins and nucleic acids into the cytosol, including functional CRISPR systems both in vitro and in vivo. Finally, this presentation will also feature the use of nanoparticles as therapeutics against multi-drug resistant bacteria, providing a potential strategy for combatting this emerging threat.

Vincent Rotello is the Charles A. Goessmann Professor of Chemistry and a University Distinguished Professor at the University of Massachusetts at Amherst. He received his B.S. in Chemistry in 1985 from Illinois Institute of Technology, and his Ph. D. in 1990 in Chemistry from Yale University. He was an NSF postdoctoral fellow at Massachusetts Institute of Technology from 1990-1993, and joined the faculty at the University of Massachusetts in 1993. He has been the recipient of the NSF CAREER and Cottrell Scholar awards, as well as the Camille Dreyfus Teacher-Scholar, the Sloan Fellowships. More recently, he has received the Langmuir Lectureship (2010), and in 2016 he received the Transformational Research and Excellence in Education Award presented by Research Corporation, the Bioorganic Lectureship of the Royal Society of Chemistry (UK), the Australian Nanotechnology Network Traveling Fellowship, and the Chinese Academy of Sciences, President's International Fellowship for Distinguished Researchers.   He is a Fellow of both the American Association for the Advancement of Science (AAAS) and of the Royal Society of Chemistry (U.K.). He is also recognized in 2014, 2015 and 2018 by Thomson Reuters/Clarivate as “Highly Cited Researcher”. He is currently the Editor in Chief of Bioconjugate Chemistry, and is on the Editorial Board of 14 other journals. His research program and spans the areas of devices, polymers, and nanotechnology/bionanotechnology, with over 550 peer-reviewed papers published to date. 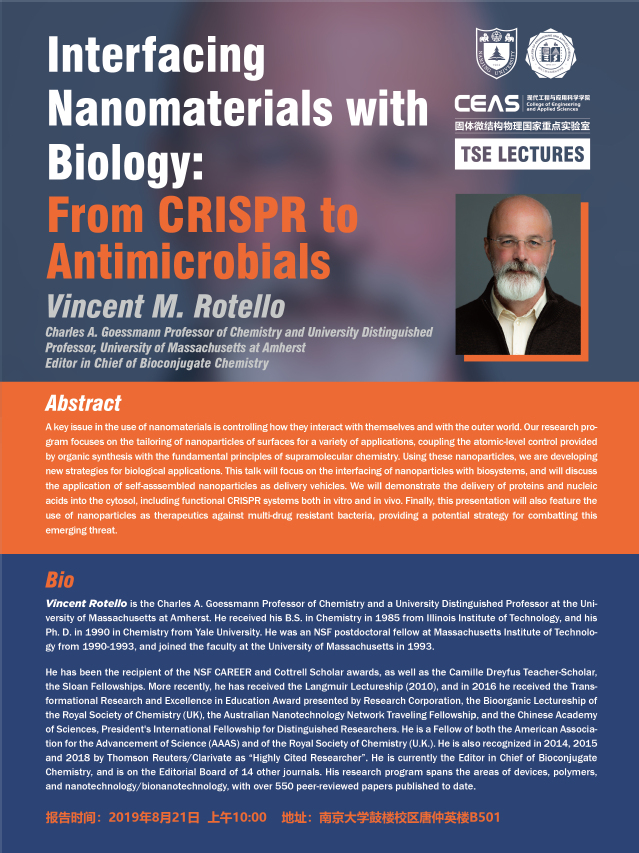